Massive world changes to come in 2019 Benjamin Fulford is the one to listen to if you need to know more about real politics or want to have a clear idea of what’s going on in the world. He is well informed thanks to his links and his impressive network he wove from his long career as an investigative reporter. Fulford allows us to understand the global power struggles and events you never hear of. That’s all the quality of his analyses!

Intense negotiations are taking place now at the highest levels of world power both in secret and in public, multiple sources agree. These could result in earth-changing announcements as early as March, they say. The power struggle in Washington, D.C. is also heading for some sort of climax, as can be seen by U.S. President Donald Trump’s threat to declare a national emergency.

One big public move was the announcement of a one-world religion by the Pope, a senior Islamic representative, and representatives from many other religions.  This came after Pope Francis became the first pope in history to visit the Arabian Peninsula, the birthplace of Islam.  The text of the announcement can be seen here.

CIA sources in Southeast Asia say that moving the UN headquarters from New York to Laos will be a big theme of the February 27-28 summit between U.S. President Donald Trump and North Korean strongman Kim Jong Un.

Asian secret societies, the U.S. military-industrial complex, and European royals are working on creating a world future planning agency, according to sources involved in the negotiations.  Several official documents related to this have already been signed, say British royal family sources.

MI6, P2 Freemason, Pentagon, and Asian secret society sources also say there is also a strong push for some sort of world government to be announced.  This can now be done in a manner in which there are no losers, only winners, thanks to a rare and nearly perfectly equal balance of world power, they say.

The map at the link below shows the three power groups, with the Western alliance in blue, the Eurasian grouping in red, and the Southern alliance in grey.  Each is roughly equal in land mass and population.  Superficially, the map shows the groups’ views on the government of Venezuela, but in reality it is a division over control of the world. 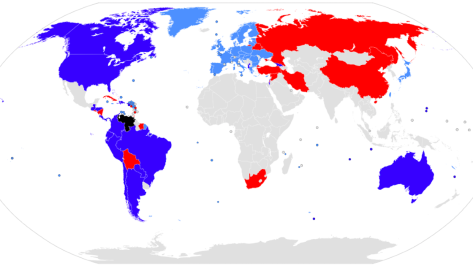 The announcement of a unified passport for all African nations last week was one visible sign of the move toward a world government.

In any case, the battle for Venezuela can also be seen as a failed attempt by the neocons (Khazarian mafia) to regain control of the international financial system by seizing the world’s largest oil reserves.

Pentagon sources note that the “U.S. puppet in Venezuela was not recognized by supranational organizations like the European Union, the Organization of American States, the IMF, the World Bank, the African Union, or the UN.”

Also, the UN, the Vatican, and the Red Cross refused to deliver “humanitarian aid” to puppet opposition leader Juan Guaidó because it was a cover for arms shipments, the sources say.  As a result, “the Venezuela coup was an epic fail,” they said.

The failure to grab Venezuelan oil may also force Trump to declare a national emergency—or perhaps more accurately, a national bankruptcy, according to CIA sources.

Pentagon and CIA sources say this could lead to the downfall of Trump… To read the rest of the article, please follow the link.